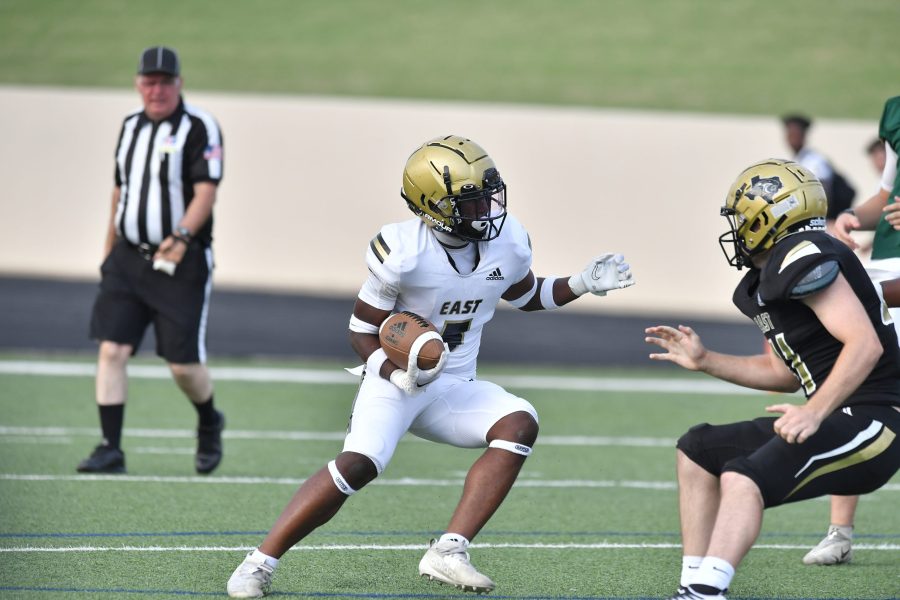 Plano East had one of the best running back tandems in District 6-6A last season with Ismail Mahdi and Xavier Franco.

Mahdi led the team with 1,332 yards rushing and 14 touchdowns in 2021, earning himself his second first-team all-district honors. Behind him, Franco added 506 yards and three touchdowns in a backup role.

With the top two players on the depth chart graduating, it becomes tough to replace that position immediately. Head coach Tony Benedetto understands the difficulties ahead for his team but believes in the talent of the kids taking place.

“You’re replacing a Division I running back who was one of the best running backs in the area,” Benedetto said. “That’s certainly big shoes to fill. Mahdi was a terrific talent and we’re eager to see where we’re at.”

Taking the place of Mahdi and Franco, Plano East has some questions ahead of the new season. Daniel Fayombo takes over the lead role as a senior, in his first year in organized football. His path to the lead-back role is one that is certainly unorthodox, but Benedetto said he has the raw talent to make a huge impact in 2022.

“He’s one of the best athletes in the school,” Benedetto said. “He’s learning the position and the sport on the fly as a senior. He’s definitely one to keep an eye on.”

Fayombo is playing his first sport for Plano East this fall, hopeful to try and earn an athletic scholarship for himself. He’s taken a lot of reps during practices, 7-on-7, and during spring football to get up to speed on the game.

“Athletically, there’s no learning curve for him,” Benedetto said. “He broad jumps over 10 feet, runs a 4.5 40-yard dash and squats over 450 pounds. Now it’s just slowing down the game mentally. Learning things like how to put a helmet on and learning how to take a handoff. Once the game slows down his physical tools take over.”

Benedetto credits running backs coach Patrick Handy for encouraging Fayombo to come out and play for the team this season and said that his teaching has helped him improve quickly over just a few short months.

Whoever is taking the snaps in the backfield, however, should expect a more balanced approach for the Panthers with the loss of their top two players on the depth chart.

“Our goal is for everyone to get everyone touches and make sure we’re not constructed to give one guy to get the ball,” Benedetto said. “We’ll see multiple running backs with double-digit carries per game and multiple guys getting targets out in passing situations.”