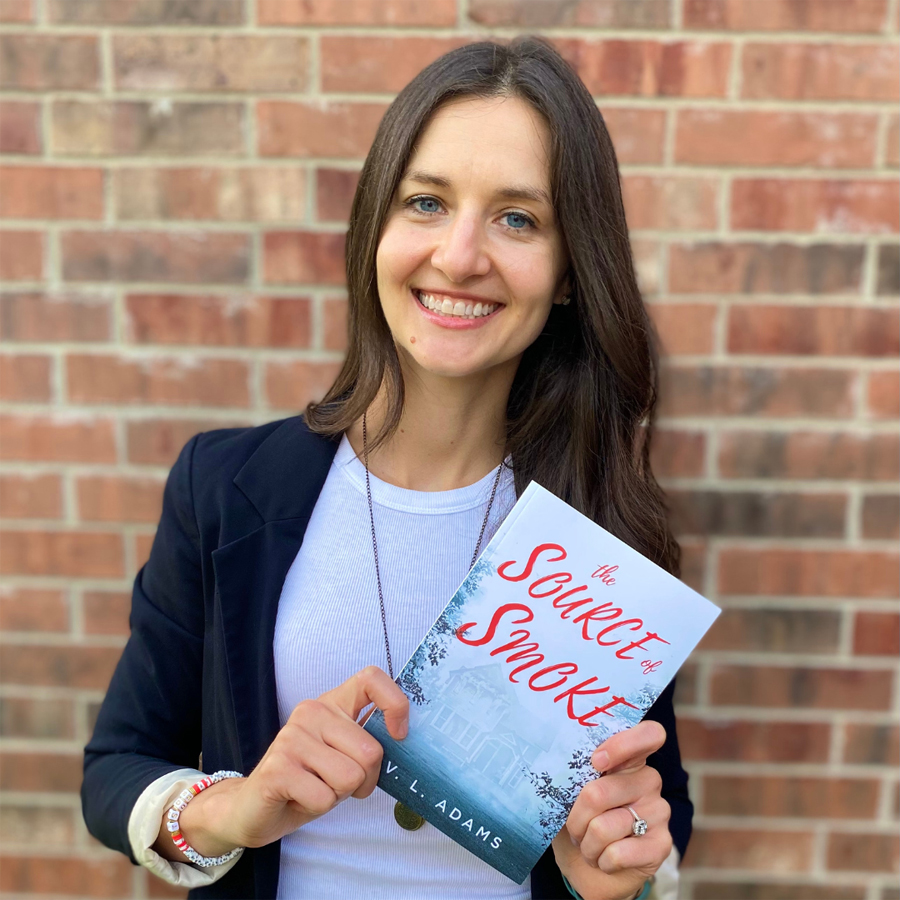 Vickie Adams said she has always wanted to write a novel.

And in the past, the Murphy resident started to write a couple of different novels, but said she didn’t take time to fully “flesh out the ideas” so she never finished them.

Writing a book is not an easy feat for a working mother of three, Adams said, adding that “getting anything done with three kids under six is difficult when they are awake.”

“I decided that it was something I wanted to do for a long time and I never got around to doing it,” Adams said.

When the pandemic hit, Adams, like many others, found herself working from home. She began using the time she previously used to commute to her job in Plano — about 30 to 45 minutes each morning — to work on her novel.

She eventually finished and self-published “The Source of Smoke,” under the name V.L. Adams. The novel is a mystery about a woman who begins to question whether her sister was murdered by her boyfriend, the person who was tried and convicted of the crime.

Adams, an Oklahoma native, earned a degree in photojournalism from the University of Central Oklahoma.

“I realized I wasn’t ready to be a freelance photographer at 22,” Adams said. “So, I took the LSAT on a whim and ended up going to law school.”

Adams earned a Juris Doctor from the University of Oklahoma College of Law and practiced for a few years before she found herself moving to Texas.

She said practicing law wasn’t really what she wanted to do and she eventually ended up working for The Center for American and International Law, a nonprofit organization that focuses on providing continued education for lawyers and law enforcement. She currently serves as both director of special events and deputy director for the institute of energy law.

The organization was founded in 1947 by Dean Robert G. Storey, a Dallas lawyer who also served as a prosecutor for the Nuremberg Trials.

Through her work with the center, Adams became interested in the issue of wrongful conviction, which influenced her writing.

Wrongful conviction is not something people really talk about unless it’s a big case, Adams said, adding that people tend to think they rarely happen when, in reality, they are much more common.

“I wanted to bring a little bit of awareness through fiction,” she said.

An avid reader, Adams says her goal is to read two or three books a week.

“Eventually, if you read enough, you get to the point where you wonder if you can write your own story,” Adams said.

The novelist said her husband is her biggest cheerleader and anytime she began to have feelings of self-doubt, she said he would give her a pep talk or “say something completely ridiculous” to make her laugh.

She said her oldest daughter is the only one of her children old enough to grasp that her mother has written a book, but in her mind, “all books are board books” and she doesn’t get why her mother’s book “is different.”

“The Source of Smoke” can be purchased at various online retailers such as Amazon or Barnes and Noble in e-book and paperback format. Adams said she is currently working to get her book in local bookstores.