Two wins between Panthers and championship 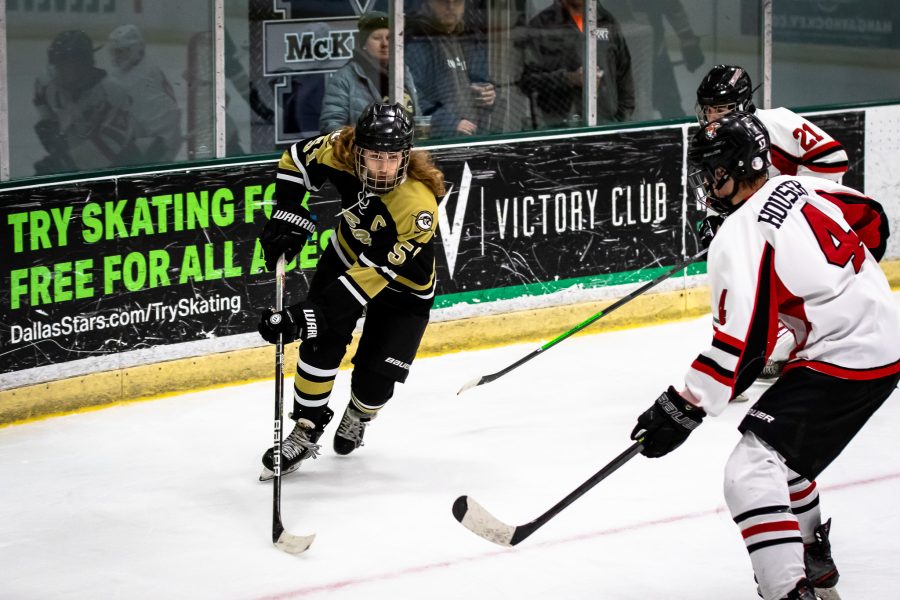 Plano East’s hockey team is on the verge of their second trophy in a month.

The Panthers wrapped up the regular season of the AT&T Metroplex High School Hockey League as the top seed from the Varsity Silver North division, clinching a playoff spot.

They got off to a strong start in the postseason, defeating Lovejoy 12-6 last Thursday, Feb. 24.

Despite falling behind 1-0 on a deflected goal early, East jumped out to a 4-1 lead in the first period outshooting Lovejoy 11-4. The Panthers led by as many as seven goals in the game, but coach Thomas Joyce credited the Leopards with their ability to fight back and compete.

“Everybody kind of recognized that not a lot of teams win state, win the regular season title and win the city championship,” Joyce said. “The team came in very aggressive and jumped out pretty quick. We learned a lesson as a team, though, because we took the lead and got too comfortable. The other team is never going to give up and it was a lesson needed.”

Despite the Panther’s winning pedigree this season, coach Joyce said the opening game was a great test for the team. Plano East clinched the state championship last month, earning victories over similar opponents before wrapping up the regular season with an 11-point gap.

Lovejoy closed the gap all the way to 10-6 in the third period, but East finally closed the door with two final scores. Coach Joyce said those little spots of adversity will help the team in the long run.

“We won three of our games at state by coming from behind so maybe that early goal was a blessing,” Joyce said. “It’s a show of maturity to fight through adversity. We want to play with all gas, no brakes and we don’t want to let teams off with no pressure. The second half of the game we struggled to get back and left a lot of odd-man rushes the other way.”

East finished the regular season with 101 goals on offense, which was 30 goals better than the next highest opponent in the silver divisions.

They piled on the offensive output against Lovejoy thanks to their work on special teams. The Panthers scored five goals on the power play in the game, capitalizing on any Leopard mistake.

“We went into the game with a similar game as the state championship by stacking our top line again,” Joyce said. “They hadn’t played together since that championship game, but they got back to it and contributed to those power play numbers. Along with those guys, we had plenty of guys who haven’t contributed a lot in the goals department playing at the right time.”

East plays their semifinal game against Allen Tuesday, March 1. The Panthers defeated the Eagles 6-0 to finish the regular season on Feb. 17, but coach Joyce said he didn’t want to look past any opponent.

“Any game is can be lost,” Joyce said. “We can’t assume because we won one time we’ll do it again. It’s a win or go home mentality and the other team is going to carry that mindset and we hope to keep that offense going and keep an aggressive forecheck to create more opportunities.”