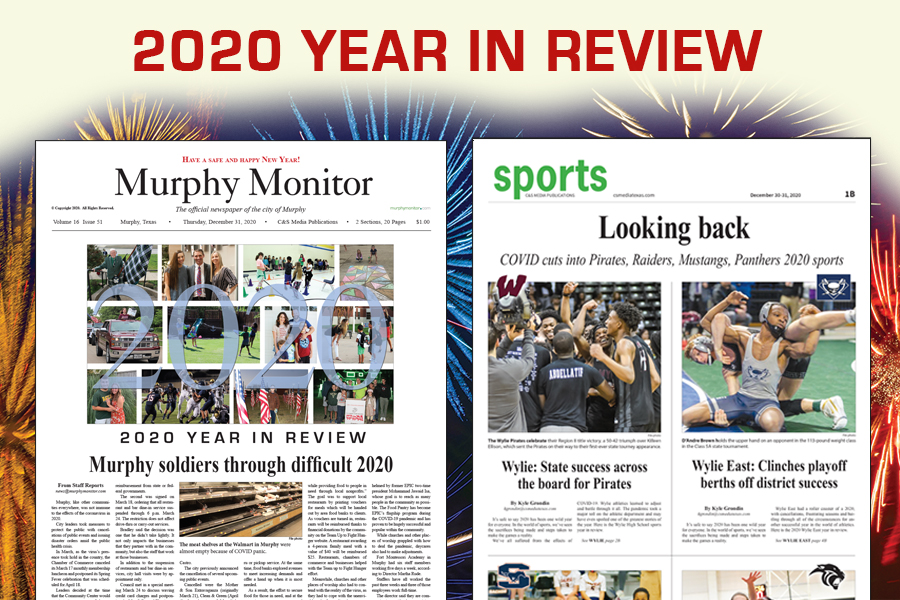 The Plano East Panthers athletic program, like most, went through the ups and downs of dealing with the 2020 calendar year. With missing many opportunities to compete and having playoff-bound seasons cut short, here is a look back at Plano East athletics year.

Lady Panthers have excellent basketball season, build towards the future

In her first season as girls basketball head coach, Jessica Linson put Plano East in a playoff position in 2019 for the fourth straight season. This matched the longest streak in school history and they were able to do it with one of their youngest rosters paired with the new head coach. Plano East’s rotation was mostly freshman and sophomore players and they worked hard in the second half of the season, winning six of their final seven games to reach the postseason.

Plano East reached the second round of the playoffs before falling short against Harker Heights. The Lady Panthers led within the final minute of the game before falling just short as they lost 62-60.

One of the most veteran basketball squads in the district wasn’t afraid of playing in the big moments last season at Plano East.

Winning three of their final four games, the Panthers pulled within one game of Plano for a shot at reaching the playoffs as the fourth seed. Ultimately, their goal fell short as they ended up finishing 14-18 overall and 5-9 in district play.

The Panthers will look to rebound and break their four-year playoff drought in 2020-21 amid a lot of questions and an ever-changing roster. Head coach Matt Wester always views that as the ultimate goal.

“My first four years we were able to make the playoffs, then we’ve missed out the last four,” Wester said. “Coming within a game of the playoffs and missing out always kind of hurts.”

Plano East lost eight seniors from the 2019-20 team, including their top player Evan Williams. He committed to Division 1 Ivy League program Cornell University after scoring double figures in 12 of his 21 games last season. Williams was a first-team all-district forward who led Plano East in scoring at 10.3 points per game, rebounds at 6.9 per game and blocked shots at 1.2 per game.

Plano East competed in the class 6A state meet and had many different swimmers place at the state level.

The top swimmer was Gio Linscheer finished eighth in the 200-yard intermediate championship finals in a time of 1:53.09.

Along with Linscheer, Maguire Sheppard and Trey Dickey also swam, with Dickey finishing fourth in the 500 freestyle championship, just one spot away from medaling. Dickey signed to swim at Texas A&M as he is set to graduate in 2021.

The trio qualified for state after strong showings in the 6A Region II meet at the Lewisville ISD Athletic Complex.

Plano East struggled to an 0-9 season while fighting through the COVID-19 pandemic, but the offense made a huge leap forward, mainly because of the help of Ismail Mahdi.

The junior tailback led the team with 1,607 total yards and 15 touchdowns for the season. His 1,093 yards was among the top in the Dallas area, according to The Dallas Morning News. He also threw a 64-yard touchdown pass during a game, proving he can do it all for his team. His yardage totals are impressive, and that’s before even noting that he wasn’t a full time running back the first few weeks of the season. Head coach Joey McCullough noticed the change had a huge effect on the offense.

“With him at wide receiver, we were only able to get him the ball in certain situations,” McCullough said. “We wanted to run more two running back sets which gave him an opportunity, but it also gave our offense an opportunity to make plays. We figured if we could get him 20 to 25 touches per game that it would put our offense in the position to succeed.”

Along with Mahdi, offensive lineman Korede Folorunso and linebacker Jordan Heisser also made the first-team of district 6-6A. Both senior leaders contributed greatly on each side of the ball.

The Plano East Panthers will continue to rebuild without some of these top players, but with players like Mahdi and up and coming talent like Harris Boyd and leading receiver Rushil Patel, McCullough thinks the tide can turn for Plano East next season.

Plano East’s volleyball team has faltered again and the season is coming to a close with just one win on the season. They finished the season at 1-14 and winless in district play, the Lady Panthers haven’t been able to find consistency in their game while also struggling to get on the court because of COVID-19 cancellations.

Since Oct. 9, Plano East only won two sets, both in a five-set loss to Hebron. They also lost a few weeks of the season due to COVID-19 that they’ve had to make up quickly by playing three games a week.

Before the season, coach Cathy Manderson was hoping for the team to show off its talent with some health and consistency in 2020. Unfortunately with the pandemic-filled season, there weren’t a lot of opportunities for consistency.

“Working with the girls is different with COVID,” Manderson said. It’s certainly been a difficult challenge for her and her team who were losing three players from last year’s roster after winning eight games.

In a bit of a rebuilding year, Plano East struggled in the district championships as the boys’ finished sixth overall, and the girls finished fifth. Like Wylie East, Plano East had only one top 10 finisher, Travis Jasper, on the boys’ side. Jasper finished ninth overall with a time of 15:40.9 and was nearly a minute ahead of the next best Panther. Donovan Bush was the next highest finisher at 31st overall. Jasper was able to qualify for the regional championship.

The girls’ team had two top 20 finishers overall, but it wasn’t enough to make up the ground necessary to climb higher in the overall meet record. Isabella Posselt finished 14th with a time of 19:11.9 followed by Meagan Key who finished 19th. Her time was 19:32.5 in a difficult district championship meet.

Over in Lubbock, Plano East’s Travis Jasper ran one of his best runs of the entire season, finishing 19th overall in the UIL Region I 6A cross country championships. He fell just short, however, of qualifying for a state championship appearance. He was one spot off of a qualification time, just .2 seconds out. It was tough to be close, but his coach Robert Reed was proud of how he represented Plano East.

“He worked hard, ran smart throughout the race and did exactly what he had to do to put himself in a position [to qualify],” Reed said. “No one passed him the last 600 meters, and in a normal year where they take four teams to state, he would have made it. We are very proud of him for the progress he’s made over the last four years and we are looking forward to track season.”

The majority of the Lady Panthers roster returns for this season. They ran a very balanced approach with multiple contributors. Any given night could yield a strong performance from Donavia Hall, Tiana Amos, Kayla Cooper and Taylor Haggan, as all return after significant contribution last season. Haggan in particular was named the newcomer of the year for district 9-6A, leading the team in scoring and rebounding at 8.7 points per game and 5.3 rebounds per game.

The spring sports suffered the most from the coronavirus pandemic. Many were only into their non-district play and didn’t get a lot of opportunities in their respective fields. Overall, while everyone wanted to give the seniors an opportunity to continue playing, health and safety became the top priority.

The first half of Plano East’s baseball season was a rousing success.

They won 10 non-district games, with just one loss and a tie under fourth-year head coach Jordan Byrd.

Other games would have been against Richardson, Lakeview Centennial, JJ Pearce and Lake Highlands.

The Lady Panthers softball team started the season 1-1 in district play before the coronavirus pandemic shut down the team.

Thomas Joyce was brought on to lead the varsity and junior varsity hockey teams for Plano East.

“I look forward to sharing my passion for the game with the players and parents,” he said. “The keys to enjoying hockey and growing as a player are having a good grasp of the fundamentals, having fun and learning something new every time on the ice.”

Other members of the silver division were Birdville and Arlington/Midlothian.

Plano East’s JV team went 4-13, with one loss in overtime within the silver division this past season. Victories were against Northwest 7-2, Arlington/Midlothian 3-1, Birdville 4-2, Denton County 6-5 and Colleyville/Grapevine 5-2.

The remaining teams in the silver field were Southlake Carroll, Prosper, Coppell, Birdville and Keller.

Plano East wrestling made the short trek to Allen for the Class 6A Region II wrestling meet.

Lady Panther Bailey Turner lost in the first round of consolation to Killeen Harker Height’s Mai-Lin Keon by a 6-1 decision in the 102-pound weight class division.

Panther Peyton Madwai made it to the opening round on the consolation side, losing by 11-2 major decision to Rockwall-Heath’s Hunter Thomas in 220.

He started with a 1:24 fall defeat to Dallas Skyline’s Christian Mendez.

With just a couple of games remaining in the season, both the Plano East boys’ and girls’ soccer teams had to cancel their seasons because of the coronavirus pandemic. The Lady Panthers were currently sitting at sixth in the district but could not have caught Boyd in the final game of its season. The Panthers soccer team had a mathematical shot at catching Boyd for the final playoff spot but were stopped with two games remaining. The boys’ team was tied for third in the district in goals scored in district play.