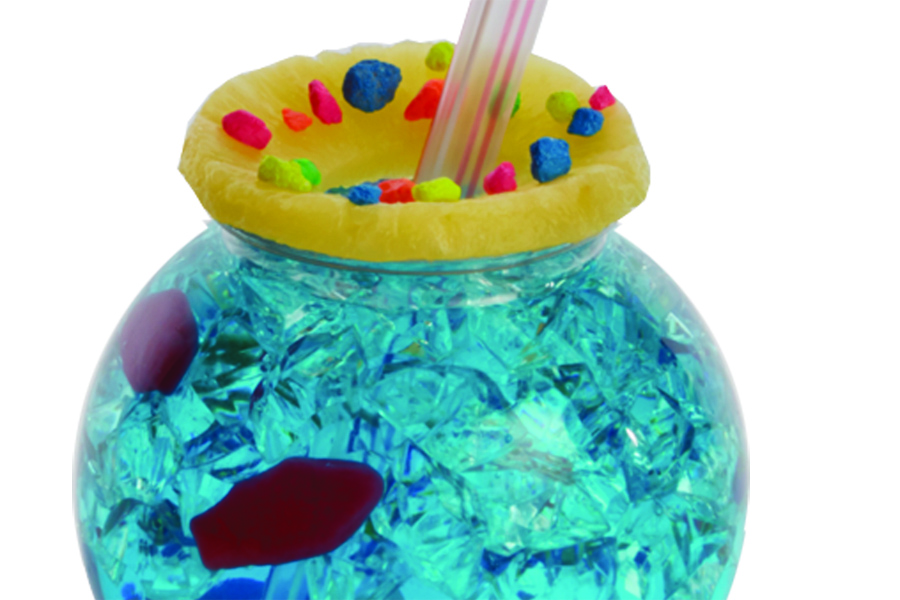 This year’s finalists proved that there is no shortage of creativity when it comes to the 13th Annual Big Tex Choice Awards. After tasting all ten foods and carefully evaluating each item, the all-star panel of judges has made its tallies and cast its final votes.

A Big Texas Choice Awards Veteran, Clint Probst is back for his ninth year at the State Fair of Texas. His creations have made the semi-finals eight times in a row. This year’s offering is a whimsical drink featuring all the flavors of your favorite tropical coast with a kick! The fish bowl is grounded with gravel made of Nerds® candy, then filled with a blue tropical-flavored punch. An alcoholic beverage, you can be assured that the Swedish Fish® swimming through the ice are enjoying themselves!

With 28 years as a concessionaire under his belt, Tom Grace is no rookie in the world of Fair food. This is his second time to make the finals in the Big Tex Choice Awards and first time winning a title. To create his Funnel Cake Bacon Queso Burger, he begins with two funnel cakes for “buns” that are fried to a golden crunch. The first funnel bun is topped with a juicy, freshly-grilled burger patty, a heaping helping of crispy bacon, and gooey queso! It is completed with another funnel bun and generously dusted with powdered sugar.

This year’s Big Tex Choice Awards posed quite a challenge for the judges who were tasked with picking the winning dishes. Going up against these winners, and proving to be very worthy opponents, the other foods that made it to the final round include: Deep Fried Chicken Noodle Soup on a Stick by Chris Howard, Deep Fried Froot Loops® by Milton Whitley, Fat Smooth by Tami Nevins-Mayes, Fernie’s Fried Texas Sheet Cake by Winter Family Concessions, Pinot Noir Popcorn by Robert Parish, Surfin’ Turfin’ Tator Boat by Melissa Harrison, Texas Fajita Fries by Nick Bert, and The Tamale Donut by Justin Martinez.