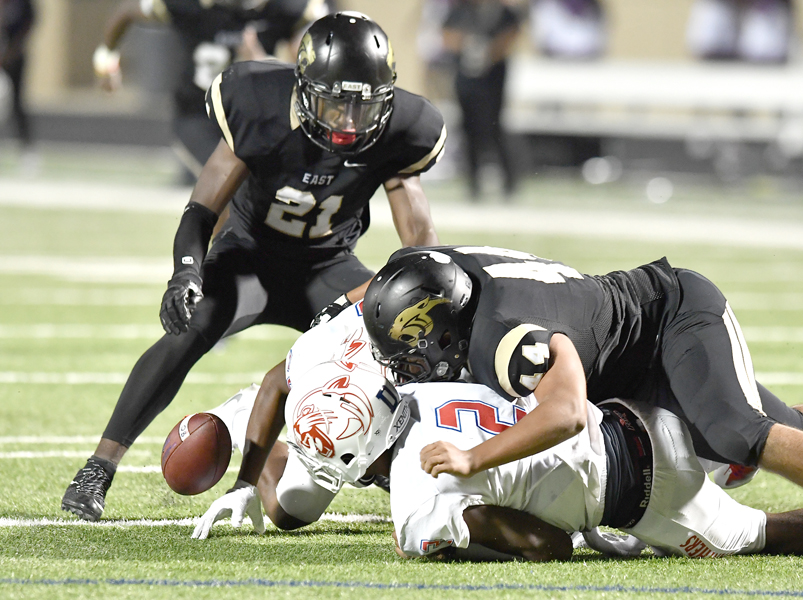 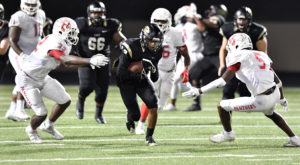 Braylon Henderson finds some running room between a pair of Duncanville defenders. (Click on the picture to view more game photos)

The Panthers will get an early wake-up call this Saturday, as they’ll travel to the Cotton Bowl to face Jesuit for a 10 a.m. contest in a Prep Showcase game.

This past Friday, PESH got an on-field wake-up notice when they fell 42-24 to a strong Duncanville squad at Kimbrough Stadium. It’s a performance they don’t hope to duplicate Saturday against the Rangers, a team also looking for its first win following a 41-36 defeat last Saturday to DeSoto.

“I want to see the biggest period of improvement over last week,” head coach Joey McCullough said. “I think it happened last year (Duncanville loss followed by a win over Jesuit) … I think we made big-time progress last year, and I think we’re going to make more this year.

Primarily, the coach said, improvement will come because many of the East’s starters last week were seeing their inaugural varsity action, including quarterback Brandon Mallory and several defenders.

“You had quite a few guys who were very young,” the coach said. “We have some seniors on this team, but more than not, we have juniors and underclassmen. I give a lot of credit to Duncanville, but we have a lot of opportunities to get better.”

(To view the entire article, check out the Sept. 7 edition of the Murphy Monitor or subscribe online)