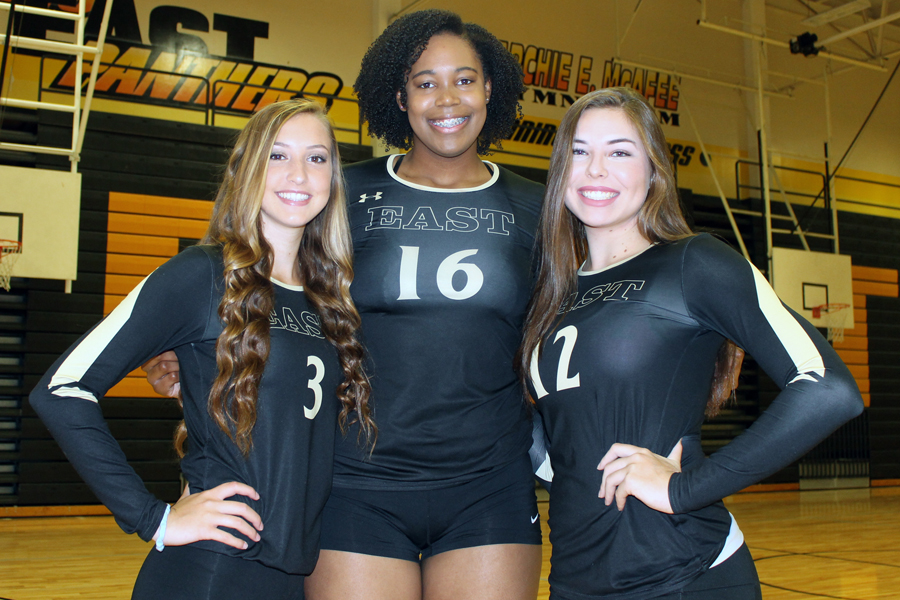 PLANO — Big things are expected of the Lady Panthers in 2017; making the playoffs is among their goals.

In order to get there, it’ll take an entire team effort to pull out enough District 6-6A victories to make that a reality. However, all teams have their cogs, without whom a squad’s engine could not function.

At the moment, three vital gears in the Lady Panthers’ motor are senior Kirby Smith (5-11), an outside hitter, junior Nicole Anderson (6-1), another outside hitter and Lauren Dooley (6-6), a senior middle blocker.

Their respective talents didn’t go unnoticed at the college ranks, including Div. I. Now, as they Lady Panthers prepare to enter the 2017 campaign, Smith, Anderson and Dooley will prepare to lead the black and gold back to the postseason, while at the same time getting ready for the next step in their volleyball careers.

For Smith, that’ll take place at the University of Texas-San Antonio, while Dooley will attend the University of Florida. As for Anderson, who still has another year at PESH after this one, her next scheduled stop is Boston College.

“I felt that playing in college is something that I always wanted to do, and with having schools looking at me, having a couple of offers before (UTSA), I felt UTSA was a good fit for me,” Smith said.

This season, she and Anderson will provide much of East’s offense, as it’ll be their job to power the ball past the opposition’s defensive flanks.

“Kirby and Nicole are both our primary outside hitters. The ball goes through them a lot, and I expect them to play very well. They should be two of the better outside (hitters) in our district,” head coach Scott Sandel said.

Anderson decided that the birthplace of the American Revolution would be her stop after falling in love with the city of Boston, and also the school, noting “it’s where I needed to be.”

Also, making an early decision also will help her focus.

“It makes everything easier. Now, I’m playing for fun more than stressing out about who is watching, (where) having a bad game could cost me,” Anderson said.

“I feel like we are definitely in the right mindset to make it to the playoffs, and have the want to go deep in the playoffs,” Smith added

How far likely will depend on Dooley, who has the size, well over six feet, but who has learned on the job, but has shown improvement from season to season.

“Any time you have somebody that size, and she is really involved in the offense, then it’s going to open up everything for everybody else,” Sandel said. “She’s grown immensely. When she first came here she didn’t know the sport that well, but she had the size. Each year she has gotten better, and this is the year I really look for her to come out (and play well).”

Her progression and size caught the Lady Gators’ eyes, and after visiting the Gainesville campus, Dooley decided it was there she next wanted to play.

“I just really liked the program, the girls, the team and the coaches,” she said.

Like her teammates, Dooley also feels relieved to have made the decision, noting that she’s not “worried about who is watching,” and can focus on improving her hitting and blocking percentages.

The trio, plus the rest of their teammates, will face their first major test at this weekend’s Pearland Tournament, which traditionally fields some of Texas’ best prep teams.

“We’re going in there seeded 30th. I think we’re much better than that, so we’ll see how it goes,” Sandel said.