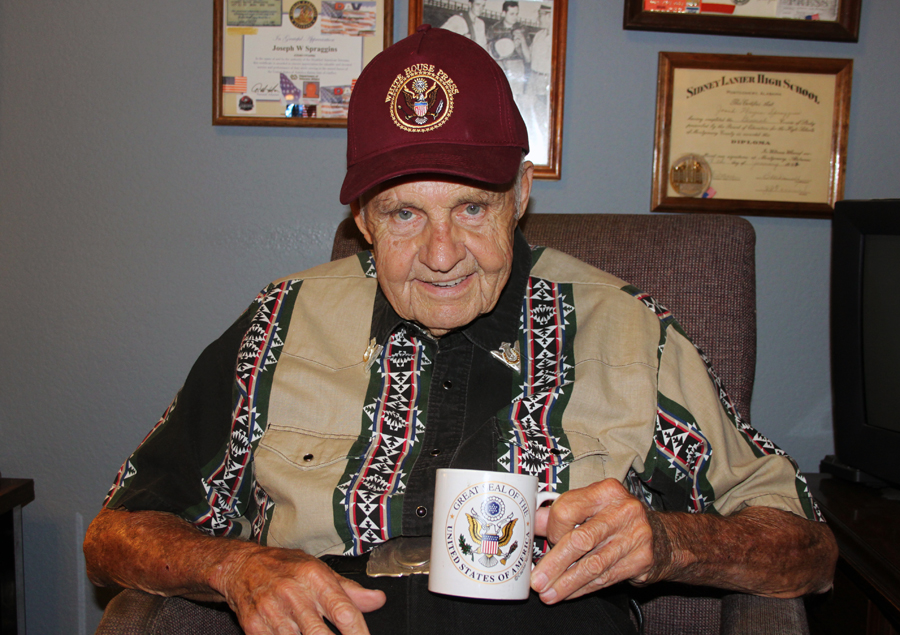 Joseph “Wayne” Spraggins, 95, of Murphy, died Wednesday, Jan. 22 after a brief illness. He leaves behind his wife of 50 years, Betty Nichols Spraggins, and numerous extended family and friends.

Wayne was born and raised in Montgomery, Ala. in 1924. He joined the Navy in 1943 at 19 years old. After his ship was torpedoed on his first mission, Wayne and other sailors were placed in the Fleet Marines. His troop went in with the second wave of Marines and he fought in the Battle of Iwo Jima.

Before the war, Wayne briefly attended Alabama Polytechnic Institute (now Auburn) and worked as a police reporter for a small newspaper. After his honorable discharge, Wayne returned to college and received a degree in Business Administration. While continuing his studies, he pursued his passion for reporting the news working for the Associated Press. Upon graduation, Wayne worked for the Houston Post, Houston Chronicle, and then as a foreign correspondent for The New York Times. A profitable Houston real estate investment offered Wayne the opportunity to explore other options, which he did. He moved to Dallas in the 1950s and became vice president and co-owner of Texas Ice Machine until it sold years later.

After his military career, Wayne received three Purple Heart awards. In November 2015, he was awarded the Congressional Veteran’s Commendation from former Congressman Sam Johnson during a special ceremony.

As a former journalist, Wayne remained committed to the craft by sending columns to the Murphy Monitor and The New York Times. Many Murphy citizens were the recipients of Wayne’s artfully prepared newsletters over the years where, for the duration of Betty’s time as a councilwoman, Wayne was her biggest champion.

The Monitor will update funeral service information as it becomes available.

Read more about Wayne’s life of in the Jan. 30 edition of the Murphy Monitor.