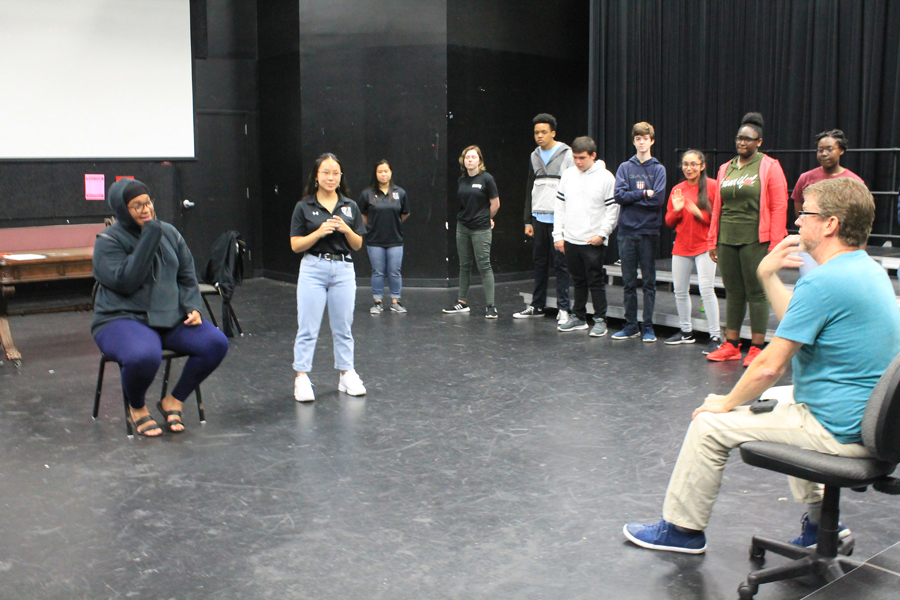 The arts are gaining more visibility in schools, but one group is still fighting to become more well known: improv.

Many high schools have added improvisation groups to their theatre departments. Rather than performing traditional plays or musicals, these organizations write and perform work on the spot.

“Improv is theatre meets sports,” said John Rawley, an actor with Alternative Comedy Theater who teaches improv at Wylie High School. “You can put the same two teams back out on the field, but you’re never going to see the same game. You’re going to see a show that will only be performed once and then you’re never going to see it again. We don’t have a script. We actually rehearse – not what we’re going to say on stage, but the format. Just as there are different play formats, there are different games you can play.”

With 20 years of experience teaching improv, Rawley understands just how connected improv and traditional theatre are, despite their differences. He watches actors grow confident in their personal lives as well as on stage.

During improv shows, performers work with nothing but a few chairs. They pantomime their actions – “setting the scene,” as Rawley terms it. An actor begins by pretending to do an obvious action like cleaning or playing an instrument, helping the audience grasp what’s going on despite the lack of a set.

“I think one of the best things about it is you go in as yourself, but as soon as you start a scene, you become a different person and kind of rewrite yourself into the situation,” said senior Ciera Gildert. “Those are thing you use in your day-to-day life and situations, and in theatre. If you’re onstage at UIL or a musical and someone messes up, you can recover quickly.”

“In a show where the script is given to you, the writer is telling you what to do,” added sophomore Tanvi Sutrian. “In improv, you are the writer. You’re writing your own scenes, your dialogue, what your character is going to be like, who their relationships are with.”

It also teaches students how to tap back into their younger selves. Rawley explained that since high schoolers are only a handful of years removed from childhood, it’s easier for them to play young characters instead of adults. When kids start middle school, he said, they tend to lose their creativity. Improv forces them to think quickly, redeveloping a childlike spontaneity.

At Sachse High School, the sentiment is the same. The theatre department’s improv troupe, Johnny on the Spot (JOTS), usually meets once a week to hone their skills.

“I think characterization is one of the biggest things [it’s helped with],” said Lucas Sanders, a senior who serves as JOTS president. “You have to build your own character from the ground up. In order to do that, you have to know how people work to begin with. Something we tell people is to go to Walmart and look at one person, and look at how they walk and talk and any little quirks they might have. Studying how people work allows you to establish that base of character that you need a lot of times in theatre. It’s one of the things I think we gloss over the most in high school theatre.”

JOTS students have developed several rules throughout the years: no cursing, no personal attacks and no political comments. Lucas noted that most professional improv groups have free range in whatever they say, making the Sachse group unique.

Although JOTS will not perform a show this year, most members are actively involved in other theatrical productions. They’ve also performed at the school talent show in past years.

The Wylie High group has shows scheduled for 7 p.m. Wednesday, May 8 and Thursday, May 9.

“I think improv really helps people,” said SHS sophomore Kristin Gooding. “It can help you break down walls and think on the spot. Those are skills in the real world, too. Improv makes me happy because I’m surrounded by people who are trying to make other people laugh.”