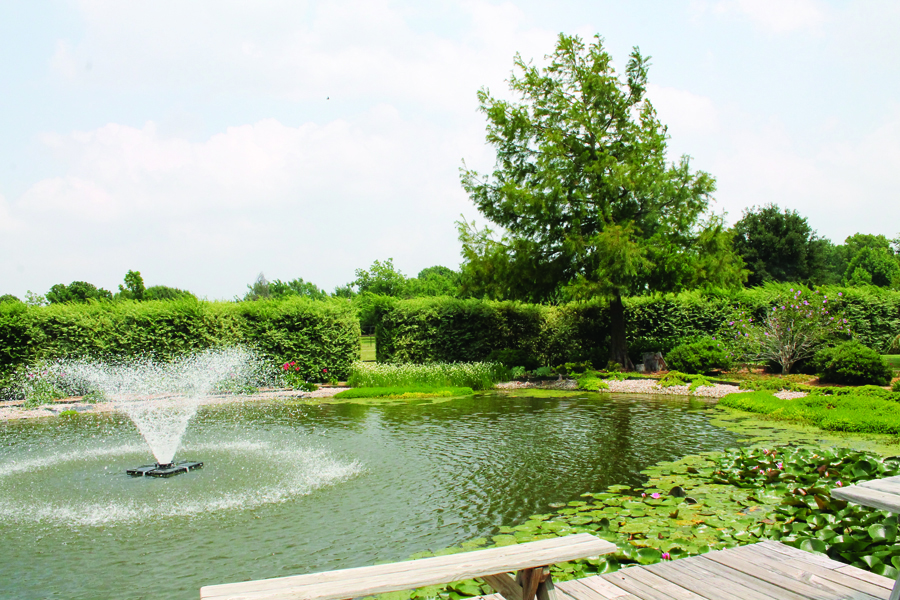 An oasis featuring a landscaped fish pond in the backyard of the Jal and Michele Dennis home in Wylie will be open to the public on Saturday, June 10, as part of the annual Pond Tour sponsored by North Texas Water Garden Society.

The Dennis backyard at 811 Crestview Lane will be open to visitors from 9 a.m. until 5 p.m. for one day, although the tour that features 41 ponds in yards throughout the Dallas area runs June 10 and 11.

Work on the pond and its landscaping started after the couple moved into their house in December 2000 and has continued since, although Michele pointed out that the work is easier now that the hardscape is in place and only a few plants have to be installed each year. Most of the plantings are evergreen and perennials.

“Michele gets 90 percent of the credit for what you see,” Jal declared.

The house sits on an acre of land, of which the pond, itself, takes up about one-quarter acre and pond landscaping covers another one-quarter acre. Years ago, the property was part of a hay field and was featureless.

“When we moved here, there was nothing here,” Michele said.

The couple divided duties on the project, with Michele in charge of plantings and Jal working to dig the pond, drill water wells to keep the yard lush and installing other hardscape features.

“I really wanted a water feature for the backyard,” Jal, who was reared in West Texas, said.

He bought a backhoe and tractor for the project and spent about two years digging and redigging the pond until he got it right. A neighbor once commented, “Jal’s not building a pond, he has a great big sandbox.”

Once he finished, the irregularly shaped pond was about 16 feet deep in the middle and was terraced up to the banks to provide different depths for fish that were later stocked. The pond contains catfish, crappie, bluegill and perch, and every now and again the couple’s children and grandchildren come over to fish for lunch, and the catch is fried for a family feast.