Though most people don’t think of tree climbing as something adults participate in, two champion tree climbers from Wylie will head to international competition in April at San Antonio.

Miguel Pastenes and Vincente Pena-Molina, who work at Arborilogical Services in Wylie, both qualified and are heading to the International Tree Climbing Championships the first weekend in April at San Antonio.

The two climbers scale trees daily in their jobs as crew foremen and often practice on weekends at Bob Woodruff Park in Plano that Houser pointed out has some of the largest, oldest trees in the area.

The North American Champion is a native of Mexico City, Mexico, went to work at Arborilogical in 2002 and won his first state championship two years later. He has won a total of eight state titles including the past three years.

“He became a state champion the third year he was climbing,” Houser said.

Pena-Molina went to work at Arborilogical after Pastenes and has consistently finished high in the state championship, winning the title in 2009. He started work on Pastenes crew and learned techniques from the master.

Houser explained that all employees start to work on the ground dragging limbs and brush to a chipper and cleaning up work sites, then are given the opportunity to start climbing. Working in the branches, however, is not for everyone and some loose heart when they are off the ground.

“It looks easy from the ground,” Houser said. “You have to overcome a lot of fears.”

The business owner noted that Pastenes, who is 5-10 and 150 pounds, has the physical and mental abilities to climb and work in treetops. Pena-Molina is built more compactly, 5-3 and 140 pounds, but is also up to the job. Neither man is muscle-bound, which is a detriment for climbers.

“What is really critical is your balance,” Houser said. 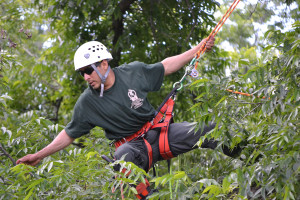 Champion tree climber Vincente Pena-Molina of Wylie works his way through the branches in a competition.