Living in the legacy 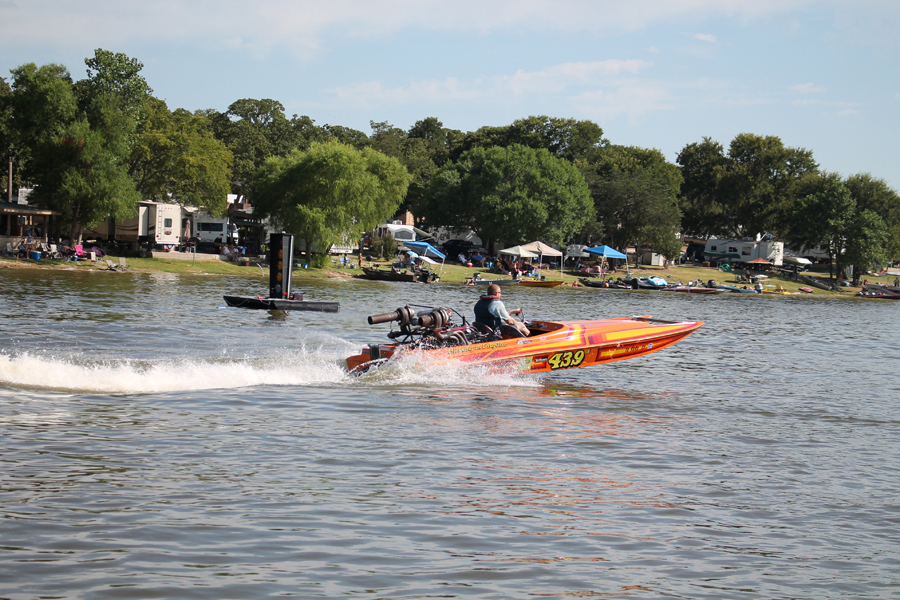 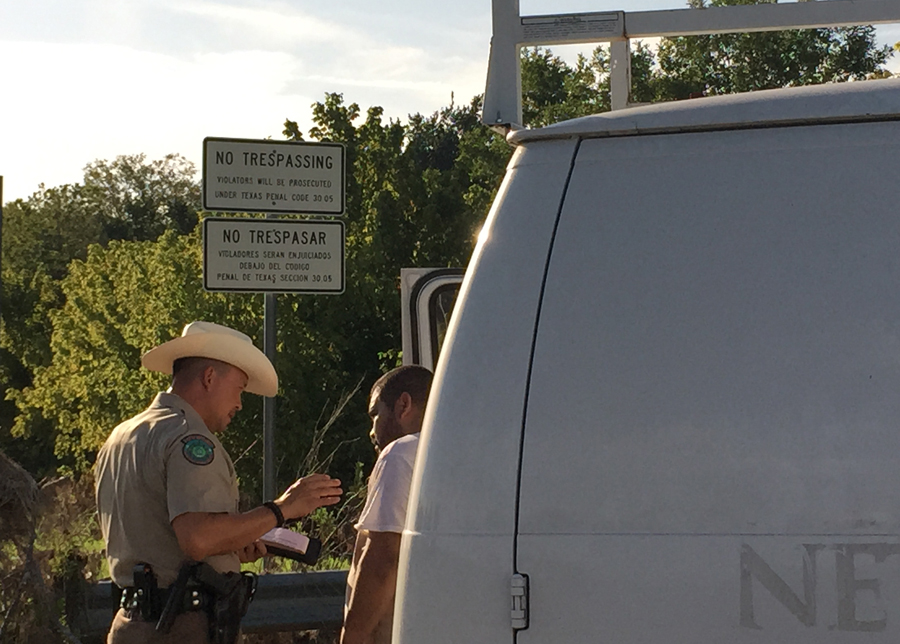 Collin County Game Warden Mike Stephens talks to a trespasser about the importance of having a fishing license. 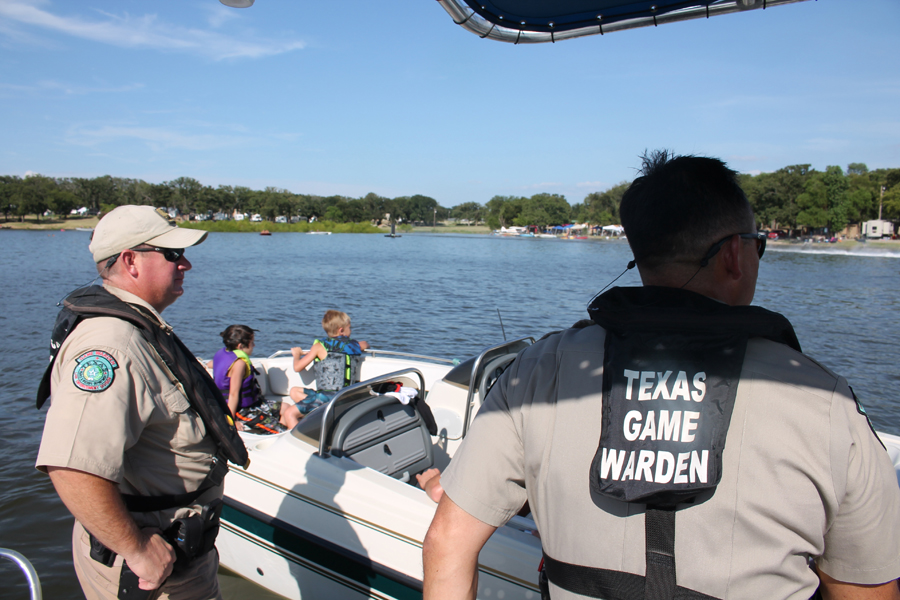 Editor’s note: this is a day in the life feature for a Texas Game Warden and a shift was spent with Collin County Game Warden Mike Stephens.

There are all kinds of different law enforcement jobs across the state of Texas, however, one of the legacy jobs is being a Texas State Game Warden.

New to Collin County, Game Warden Mike Stephens never knows what he will be up against on a day-to-day basis.

After spending 20 years in the U.S. Navy, Stephens was hired as a game warden and assigned to Dallas County. Then several months ago, he relocated to serve as a Collin County Game Warden, along with three others. Stephens has been a game warden for three years.

Each day on the job presents its own activities, its own challenges and its own rewards.

After spending an entire shift with Warden Stephens, this much was abundantly clear, game wardens have a difficult and dangerous job.

First up on the shift was a trip to Lake Tawakoni where an unsanctioned boat race was occurring.

Not unlike state troopers, game wardens are able to enforce laws, including traffic laws, across the state and often cross into other counties when the need arises or their help is requested.

Unlike sanctioned boating events, the one on Lake Tawakoni was not sanctioned, thus increasing the dangers such as less skilled boat drivers. In the state of Texas, boats are required to have registration done every two years though no inspection is required.

Setting out on the lake in the game warden vessel with lifejackets donned, it was clear that fun was about to commence.

People on Tawakoni minded their manners. The presence of the game wardens could be seen and felt on the lake, making residents pay attention to water safety.

For example, the wardens knew about the unsanctioned boating event because the owner of the marina told Game Warden Miller about it for safety purposes.

“If something goes wrong we are it,” Stephens said. “Yes, there is a fire department out here but they would have to go get their boat, hook up and get out here. That takes time.”

Patrolling the lake in a boat in the heat of the summer can be tough, especially if it’s not for recreation. Occasionally, a boater was stopped and water safety was enforced, including making sure a life jacket was on board for each person.

“We have no tolerance when it comes to those under 13 wearing their life jackets,” Miller said. “You will be written a ticket.”

State law requires that anyone under 13 wear their life jacket while on a body of water and there must be a suitable life jacket on board of a watercraft for each person.

“I’ve never seen any drowning victim that was wearing a life jacket,” Minter said. “Drowning is one of the most difficult things we deal with.”

For all three game wardens, keeping a balance between work and their home life is the most difficult part of the job. Since they build relationships with land owners who also have their cell phone numbers, they can be called at any time.

Aware of sunset and wanting to go check on a landowner’s property where poaching has been a problem, Stephens set out for South Dallas County.

“There is a vast difference between Collin County and Dallas County,” he said.

When called out for trespassing in Dallas County, the situation could involve any number of things … a stolen vehicle, drugs or even homicide.

“In Collin County when you get that call it can literally be someone picking flowers with the landowners permission,” he said.

On the way to South Dallas, Stephens noticed several cars parked next to a stream with a clear “No trespassing sign.”

Pulling over to the vehicles, an investigation began. Were there people in the vehicles? Weapons? Fish?

Following boot prints, Stephens made his way down to where it appeared the occupants of the vehicle had gone.

“I have to have a fishing license,” Stephens said. “It’s $30 for a whole year of entertainment and food.”

Having a fishing license allows the holder to fish in any public body of water throughout the state.

Being told by other anglers two more were fishing downstream, a hike began to locate them and get them out of the private property.

Explaining this was private property, and in reality he could take the fishermen to jail for trespassing, tickets for no fishing licenses were written to three people. He also provided them with educational materials on the laws about fishing.

After making his way back to the truck, the game warden then proceeded to make his way to the property in South Dallas.

After making contact with the landowner, Stephens also received a call from a neighboring landowner about people trespassing and fishing in his pond. Checking that particular property plus an additional one that had problems with poaching, Stephens once again emphasized the need to make and maintain relationships with landowners.

“Oftentimes, little treasures can be found on land that people would never imagine and we get to see those because of our relationships with the landowners,” he said.

After leaving the property, Stephens stopped and talked to a neighboring landowner about any problems he may have been having.

“My life is a thousand times better since ya’ll have been helping,” he said.

After concluding his conversation with the landowner, the game warden began to patrol the surrounding roads, looking for anything suspicious. Finding a vehicle sitting on the darkened road in South Dallas, Stephens cautiously approached.

It turned out to be a couple simply spending time away from their home and kids. After checking them for warrants, Stephens began to make his way back to Collin County.

“We are out there serving the people of Texas and there isn’t a game warden out there that doesn’t think about that when he puts on the uniform,” he said.

After starting back on the President George Bush Turnpike and nearing Collin County, Stephens noticed that a car did not appear to have their lights on. Generally, game wardens do not enforce traffic laws, however, since having no headlights on is usually an indication of a drunk driver and thus a safety concern, he pulled the driver over.

As luck would have it, there was simply a malfunction with the lights, making the taillights not visible when the headlights were engaged. Issuing a warning to the driver to get it checked out and to drive safely, Stephens concluded his night.