Murphy schools among the STAARs 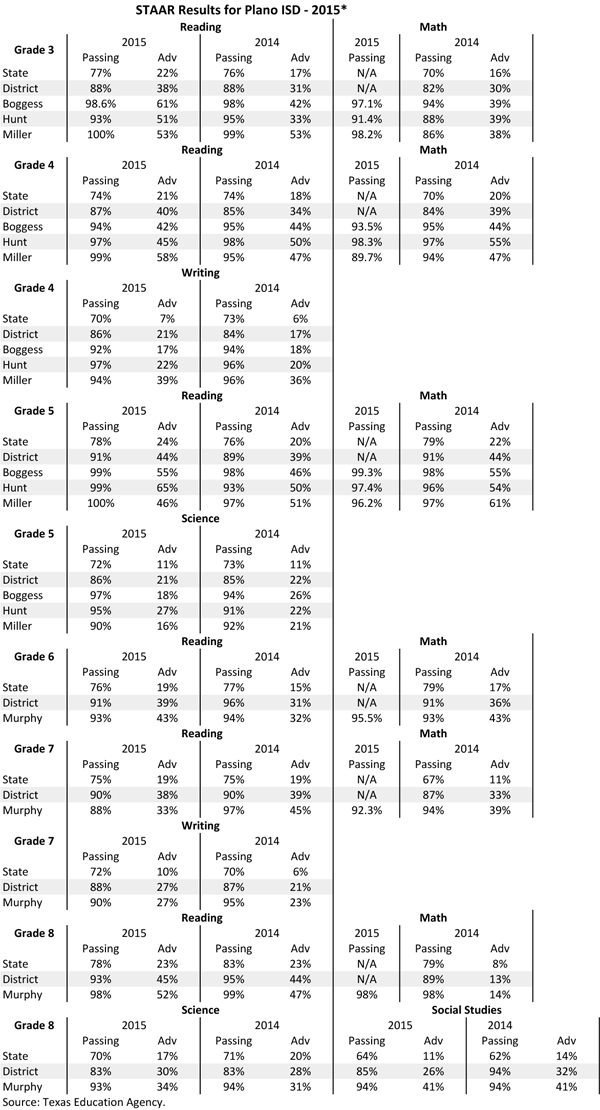 During spring of the 2014-’15 school year, students in grades three through eight across Murphy sharpened number two pencils to take their STAAR end of course tests.

District passing rates in all grade levels and subjects were higher than those of the statewide average, excluding math scores, which have not been included in the district’s accountability.

“In making the transition to Plano ISD and prior to my official start date of July 1, I met with students, teacher leaders, principals and leaders in the education, private and public sectors,” Plano ISD superintendent Dr. Brian Binggeli said. “Through those interactions, it became evident that the Plano ISD community values the outstanding education that our district provides. With our community’s expectation for excellence in mind, I am pleased with the progress reflected in recent STAAR and EOC results at all levels. We are proud of the efforts of our students, parents and teachers. These results can be added to other measures of student opportunity and success as we pursue the district’s mission of providing an excellent education for each student.”

Across the district, four grade levels showed progress in reading tests with elevated scores compared to the 2014 spring testing.

The writing STAAR test was administered to students in grades four and seven. Boggess Elementary, Miller Elementary and Murphy Middle School all showed decreases in their scores from 2014 while Hunt Elementary showed a one percent increase.

Murphy Middle School had a 90 percent passing rate while the state trailed 18 points behind with only 72 percent.

The math STAAR test was taken in all grades, however those scores will not be included in the district’s accountability this year.

The district, along with various other districts, requested the state board not count math STAAR scores this year as part of their accountability. In April, the state suspended accountability for the entire state of Texas.

The individual schools’ scores are available.